There are thousands of podcasts floating in the podsphere, but what about the talented people behind them?  I recently had the opportunity to ask Alasdair Stuart of the Escape Artists family of podcasts a few questions about podcasting, EAs future, and herding cats. 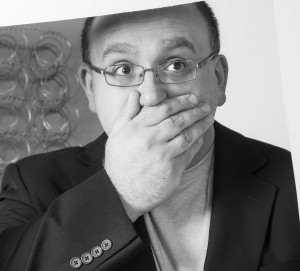 Let's start with the standard boilerplate question. How did you become involved with podcasts in general and Escape Artists, Inc., in particular?

The first podcast I ever remember listening to all the way through was the first episode of Escape Pod. It took 25 minutes to download onto my pea green imac from a dialup line that I had to plug into the phone socket.

The second podcast I can remember listening to was episode 1 of Pseudopod. And that was the point I realized I was, despite my epic spaceship love, probably a horror guy.

When Mur left, in a rare (especially then) feat of confidence I emailed Serah (then Steve) Eley and volunteered to take over. To my blunt astonishment, they said yes.

My first episode was, I think, episode 49. Go back and listen to it. It’s hilarious. I sound like I’m talking to the entire internet all of whom are in the room looking at me. I’ve got better since then:)

ESCAPE POD, PODCASTLE, PSEUDOPOD, and CAST OF WONDERS are all terrific podcasts, and you've recently expanded into the world of print with MOTHERSHIP ZETA. A quarterly print magazine seems like a big change for a podcast powerhouse such as Escape Artists, Inc. How did MOTHERSHIP ZETA come to be?

We spent a lot of time kicking around ideas for expansion and, if I remember correctly, Mur was the one who brought us the idea of a quarterly e-zine. Mur’s the reason I’m in podcasting and she’s awesome and talented and a great editor so when she says ‘Hey this might be a good idea?’ we listen.

It’s going really well too. Mur, Sunil Patel and Karen Bovenmyer are doing amazing work over there and the response to it was incredible. We actually sort of broke Submittable when we opened for submissions. Something like 850 in a week?

To the best of our knowledge, they have never broken it.

Your move, NYT. YOUR MOVE.

Now, interestingly the sales haven’t corresponded to that enthusiasm quite yet but I think that’s a function of us being a new digital magazine. That markets like novellas. The future is being forged there it’s just most folks haven’t quite noticed yet.

Back to podcasts. One of the many things I love about EA is the wide variety of stories you produce. Other than the venue, and the often subjective editorial preference, what do you feel makes a good, podcastable (Is that a word? It is now.) story? Dialogue? Number of characters? Descriptive prose? Phases of the moon?

Phases of the moon are ESSENTIAL.

Honestly, my answer to this question has changed in the last few years. Normally I’d be inclined to say:

-Rock solid structure with definitive, if not necessarily tidy ending

But increasingly that’s not needed. We’re about, as I write this, to run a Nick Mamatas story on Pseudopod that’s set inside posthumanity’s collective consciousness and uses a well-known arcade game as a frame work for all-out war with a Cthonic intelligence.

That, on audio, works brilliantly and it’s not the first structurally wacky story to do so. So increasingly I’d say stories with strong through lines, character voices and structural eccentricity.

EA podcasts differ from many other genre podcasts by embracing older fiction:   CAST OF WONDERS' "The Tell-Tale Heart" by Edgar Allen Poe (read by Ian Stuart); ESCAPE POD's "Rescue Party" by Arthur C. Clarke (read by Norm Sherman and a full cast performance); PODCASTLE's "The Madness of Andelsprutz" by Lord Dunsany (read by Steve Anderson); and perhaps my favorite pairing, PSEUDOPOD's "Oil of Dog" by Ambrose Bierce (read by Ben Phillips), and "The Horror of the Heights" by Sir Arthur Conan Doyle (read by you). Why bother with older fiction? Why not stick with original or reprint fiction that is certain to appeal to most modern tastes?

There was a metaphor I found myself using to describe my education a while ago. I imagined it as being like taking a tour through a colossal museum which holds every single aspect of human culture within it. You pass these incredible displays and sometimes you stop and learn about them in detail but on someone else’s schedule.

Then when you’re done? The museum is open to you and you can go wherever you want.

That’s where the classic stories and BJ Harrison’s amazing Classic Tales comes in. There’s incredible worth in these older pieces, both as stories and historical artefacts. The Sturgeon story EP ran as episode 500 in particular is a perfect, and heartbreaking, encapsulation of the desire to explore and the prices we’re willing to pay for it. And one I’d never have heard if it wasn’t for that episode.

So, we view the classic episodes as steering people to interesting things they might otherwise have missed.

Escape Artists, Inc., produces podcasts under a Creative Commons Attribution-NonCommercial-NoDerivatives license - people can share the content, but not change it or sell it. What are some of the pitfalls of a Creative Commons arrangement? Have you ever had a writer refuse to allow his or her story to be produced because of a CCA?

Second question first; yes. About two or three times a year. Always with estates or publishers. The traditionalist institutions of the industry basically, which is understandable. We never take it personally, but it does frustrate us. The issue every digital market, and every podcast especially, has is people taking us seriously. Every time someone balks at the CC license that shows us how far we’ve still got to go in educating people.

First question, second; honestly not many. We have a huge listener base and a big reason for that is that we’re distributed thought a CC license. Audio podcasts in particular have benefited from this model and it’s one of the cornerstones of the company. So, aside from authorial caution and the occasional perception of podcasts as a ‘second class’ market.

You are both co-owner of Escape Artists, Inc., a narrator/reader, and something of a second-tier reader for many of the podcasts, quite a juggling act on the best of days. How do you keep all the balls in the air? Where do you draw the line between "This is mine, I decide how it's run" and "Let the editors and staff do their jobs"?

I will get back to you when I figure it out? 🙂

This is actually something Marguerite and I talk about a lot. She’s the company COO, so she runs meetings and does a lot of the catherding and often I am one of those cats. That division of labour frees me up to be a host, reader where needed and also to be able to come up with occasional big weird ideas that we can then implement.

It’s not always easy. I…have a natural inclination to go up to my elbows in every problem and scream ‘DAMN IT DON’T YOU DIE ON ME!!!!’ but you can’t do that, especially not with a five publication, 75 person, multi continent company. So I struggle sometimes but I keep focused on what I can do and trust the others to do what they can do.

Crowdfunding is the life's blood of many a digital or podcast. Listeners and readers are encouraged to donate or subscribe to the EA productions. To paraphrase, free fiction is the bestest because it's free, so why should we pay at all? Where does the money go?

Very few of our listeners donate. Seriously, we have, across the four shows, over 350,000 unique downloads, month on month. Assuming each one of those is an individual listener, roughly 1% donate.

The thing is, we’ll get there but like everything, it won’t be fast. So, we work with what we’ve got and we are intensely grateful to everyone who does donate.

As to what it gets you, the short answer is; us. Every cent we get covers server costs, authorial payments and staff overheads . Most of our staff are paid, none of them are paid what they’re worth, and we’re grateful to them too. The great thing is, these days there’s a bit leftover sometimes, and we invest it right back in our authors and listeners. Con presence in particular is a big emphasis right now, so we’re supporting our crew who go to conventions with freebies to hand out and, where possible, help with costs.

With the launch of a digital print magazine and the pursuit of SFWA professional market standing, the past 12 months have sparked a variety of changes for the EA family. What's on the horizon? Where do you see the various EA projects in the next five years?

Marguerite, who as you know is amazing, and I have been working on this.  We’ve got a plan up to the middle of 2017 with stuff sketched out past that. Here’s some of what we’ve got on deck;

-Rolling out narrator (paid) across the whole company. Podcastle has it, Escape Pod is next and the other shows will follow by the end of the year.

-Pseudopod’s 10th Anniversary! We’ve got a party planned at Worldcon to celebrate.

And Dave Thompson used to talk about doing an EA con. That’d be fun…

1 thought on “LISTEN UP: Who Was That Masked Man? (An Interview With Alasdair Stuart)”