2018 has been a year, as evinced by the lack of updates on this site.  A book release, a major move, two major health crisises, two conventions, transitioning our youngest into an adult home.  Yet I'm still here, so I'll call it a win.

Perhaps the biggest news of the year is the release of my short story collection GODFALL & OTHER STORIES from Hydra House Books (available here).  The collection is all Cat Rambo's fault.  She said, "You're at a point in your career where you need to get your name out there.  Send me some of your stories.  Convince me that you have a collection, and I'll help you put it together."

Two weeks later, she agreed to edit the collection and voila! 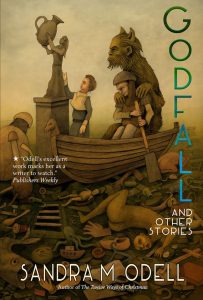 The collection received a starred-review from Publisher's Weekly.  Four stories are original to the collection and eligible for fiction nominations for 2018:  "The Home For Broken" (listen to it for free here); "Scarecrone"; "Good Boy"; and "Black Widow".  Many of the other stories such as "Ink", "A Troll's Trade", and "Blue", are also available in podcast form.  The collection itself is also award eligible.

Of the new stories, "The Home For Broken" is the most personal, touching on the joys and pains of raising a disabled child.  I wrote it for myself, and am both surprised and humbled that it has resonated with so many readers.

What else?  I am now an Editor at the Drabblecast podcast.  I still listen to podcasts, though I don't write about them as often as I once did.  I am an Associate Editor in charge of author spotlights at NIGHTMARE MAGAZINE.  I have a Patreon where I ask questions, make paper craft cards, and explore what it means to be queer and disabled.  I have slowly begun to write again.  I attended Worldcon in San Diego, saw many wonderful people, and sat with the amazing Escape Artists, Inc., crew for the Hugo ceremony.  I also panicked, panicked more, hid in my room, and almost believed the shadows when they insisted everyone hated me and the world would be better off without me.

The season is upon us, the season of ghosts, haunts, haints, and the delightful chill of dark tales whispered at the dead of night.  Over the last two weeks on Twitter (hint: follow me @WriterOdell) I've shared some of my favorite horror podcast stories to help set the mood and I wanted to add a few more to the list because, let's face it, you can't have enough scary stories.  So, in no particular order: END_OF_DOCUMENT_TOKEN_TO_BE_REPLACED 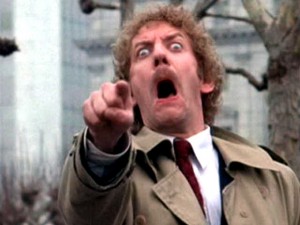 I'm not a writer, I'm an imposter, not that you can tell because I writer like a writer doing writerly stuff.  Handy that, yes?

Imposter syndrome is a professional hazard writers know well.  We are dreamers, schemers, plotters, purveyors.  Loud, obnoxious personal demons insist we're fakes and phoneys.  Even the likes of the immensely talented Neil Gaiman has fallen prey to imposter syndrome.  As he said in his "Make Good Art" Keynote Address at the University of the Arts in 2012:

"The first problem of any kind of even limited success is the unshakable conviction that you are getting away with something, and that any moment now they will discover you. It's Imposter Syndrome, something my wife Amanda christened the Fraud Police.

In my case, I was convinced that there would be a knock on the door, and a man with a clipboard (I don't know why he carried a clipboard, in my head, but he did) would be there, to tell me it was all over, and they had caught up with me, and now I would have to go and get a real job, one that didn't consist of making things up and writing them down, and reading books I wanted to read. And then I would go away quietly and get the kind of job where you don't have to make things up any more."

I sometimes wonder what it would be like if other professions had this problem.  Can you picture a surgeon worrying that someone will figure out he doesn't actually cut and only draws marks on his patients in red and black ink?  Or a firefighter convinced someone will suddenly figure out he can't really put out fires?

So, yeah, I'm an imposter.  How do I know this?  Because people actually think I'm a writer!  Can you believe that?  I can't.  Yeah, sure, I put marks on paper or a computer screen, and sometimes people read them, but that doesn't make me a writer.  Any day now I'll hear that knock on the door and open it to find Neil Gaiman's guy with a clipboard standing there, waiting to take my computer and hand me a McDonald's uniform.

But don't fret.  Even this blog post is a clever ploy to bolster my writerly façade.  I've fooled plenty of people.  It's what imposters do.  Writers I greatly admire remark on posts I make on Twitter!  I've exchanged emails and conversed face to face with editors!  People have complimented me on the author spotlights I've done for LIGHTSPEED MAGAZINE and NIGHTMARE MAGAZINE. Not once, not twice, but three times, three times mind you, a complete stranger has contacted me out of the blue to compliment me on one of my stories.  I'm an imposter, I tell you!

Some days it's harder than others to convince myself that I am, in fact, a writer.  I am certain that I am one rejection slip away from being found out.  Every writer is.  If I had a nickel for every time I've heard even award-winning, bestselling writers talk about their own imposter syndromes, I'd have plenty of overused metaphors to continue that comparison.  The secret to winning out against the imposter?   Keep writing.  At least that's what I do; not for readers, or editors, or the neighbor's dog, but for myself.  Most days I don't like what I've written; some days I do.  Write hundreds of words, thousands, write until I'm exhausted, write a single line and break down because I'll never be able to write again.